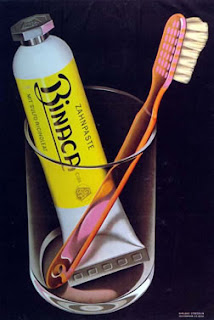 The hexagonal cap later was replaced with the knurled, conical type.

Freebies have always been offered to attract the public to sell various products. Just like people went to theatres mainly to see a ‘trailer clip’ of a future movie, people bought products for the free item rather than the product itself! Marketers had begun to see how a ‘free tag’ works on human minds. ‘Buy one get one free’ was not certainly thought of for most part of the last century, but free items were offered that were good quality, unlike what we see now – they are real junk, throwaway toys or useless items which are advertised in an attractive manner to which people fall prey, thanks to their kids who are the advertisers’ target!

In the 1960s, we had Binaca Toothpaste. It was a popular brand and most homes had either Colgate or Binaca. But the humble ‘Nanjangud Toothpowder’ was always there… to eat (yes, it was tasty too!) as standby in case the tube was completely squeezed out! Kids loved the Nanjangud flavour and aroma of the pink powder. Toothbrushes too were making its entry fast during that time, with the development of Nylon Bristles that lasted long – products were ‘made to last’, unlike the cheap ‘use and throw’ items that flood the market today. Speaking of Nylon, I still use my grandfather’s shaving brush that he must have purchased in the late 60s. He used it for about 8-10 years and then when it was time for me to shave I began using it almost 30 years ago! The bristles remain amazingly straight in spite of being continuously used [I hang it upside down – that may be a secret!] hundreds of times over. I’ve deviated off subject. Let me come back to the freebies of Binaca.

Despite their roaring market, they probably wanted to stay high and so they introduced a free ‘water picture’ [hope I’m right] with every carton to hold on to customers. They were days when stickers or self-adhesive tapes had not entered. They were ‘gum and gum tape days’. This little piece of paper with a hidden picture had to be soaked in water for a few minutes, then had to be stuck when still wet, to a glass surface and slowly peel off the protective layer. This had to be done with deft hands of an adult lest the delicately thin picture would get damaged! It got stuck when dry. I picture a few here: 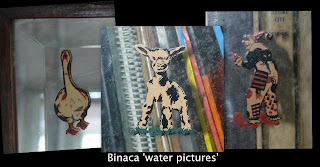 They are still looking new even now, as if it was stuck last week. Just as we stand in front of that mirror or go to the bookshelf, the mind jogs back to the era of the ‘light green’ toothpaste and also the immensely popular Wednesday 8 PM show “Binaca Geet Mala”, presented by Ameen Sayani on Radio Ceylon’s ‘Vividh Bharti’.

Hotels that boasted of radios [not many homes had even a radio in those times] were crowded at that hour, either for business or just standing and listening outside [volume was on a high always – what thrill!]. In our house most of the members of the joint family [I was too young to appreciate that at that time] crowded in front of our Bush Radio at that hour. The product sold well, stopped people’s bad breaths, kept shiny teeth and gave little gifts like those.


Binaca surely held on to customers with its unique ways! Not for nothing it was popular! 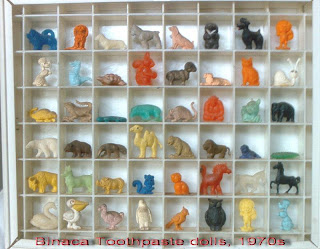 Later in the 70s, there came enclosed with each tube of Binaca, tiny plastic figurines of various animals. This soon became a collecting fancy. Friends even exchanged their duplicates for new ones. No sooner the toothpaste carton arrived home or even at the shop counters itself, we would curiously open and see which doll was in!! I must say, they were still the days when recycled plastic was unknown. So these cute little things are of soft virgin plastic.

Binaca could not cope up to stiff competition from other brands in the 80s and even tried to change the name to ‘Cibaca’ to see if they could hold on, but it faded away slowly off the shelves. But on my showcase shelf, I’ve treasured the cute little “Binaca Dolls” to remind me of those good old days.

A toothpaste, which contains New Zealand Bee Propolis to ensure healthy teeth and gums, and to protect against mouth and gum infections. Propolis is a pure organic substance with a natural antibiotic action, and is used by the bees to protect their bee colony from infection.
Regular and proper brushing with Red Seal Propolis Toothpaste helps keep your mouth fresh and healthy. Use is particularly recommended to prevent infection of receding gums and in cases of gingivitis. May temporarily darken teeth (brush with Smokers Toothpaste to alleviate).

Omkar, Thanks for your response and insight.

Oh Bianca toothpaste is it? I have not heard of it, sadly...i belong to the gen. which knows only it's colgate and close-up fresh breath! But i can totally relate to the marketign stratergies companies adopt...my mother is a marketing teacher, and i've heard her often talk about this...thanks for your views as well. informative post.

I have been posting ads to buy binaca toys from so long. Lost my collection when water had filled up in my house. Have not been able to forget it. Please if there is anyone who would like to sell any of the toy please email to me.

Mr Dinakar KR, I loved your collection and am so happy to see my little friends again. Thanks a lot for refreshing my memories.

just loved your collection. thanks for bringing back those memories

Thanks for bringing back the golden memories about tiny little friend with whom many of us would have spend our holidays.. thanks a lot

I happened to read your article. I remember Binaca giving golden coloured trinkets along with the toothpaste. This has not been mentioned. Can anyone give some information on this?

Sri Bharghav, thanks for your comment. Somehow, I do not remember the trinkets offered by Binaca.

Thanks for reviving old memories so effectively and with photos. However there's one small error that could perhaps edited:-
Radio Ceylon never broadcasted 'Vividh Bharathi'. That name is an All India Radio product. Radio Ceylon in their English broadcast would air a popular program they called "Choice Of the People". Perhaps it was called "Man Chahe Geet" in Hindi. Others should clarify.

Thanks Deepak, I will make note of this.

Hi, I was searching for the toy figurines, and came across your blog. was delighted to see the
display case which is interesting and could you please help me with making one... the material used etc. I have more than 100 toys and would like to make a display just to relive the sweetness of childhood.

Magnificent collection, I have 70 plus of them including quite a few duplicates which I do not see in yours, if you are interested in exchanging please email me at amitracal@gmail.com.

Thanks Abhijit.... I have only a few duplicates too... may be they are among your 70.

I have over80 in number and many duplicate one, if someone's looking for exchange.

I felt nostalgic seeing the binaca freebies collection and relived the childhood memories. Thanks Mr. Dinakar for sharing the pic of little friends. If Mr. Abhijit can also upload the pic of his collection, interested members shall feel delighted. I too have only few of them and it always gives me smile whenever I open my memory box.

From murugan thiagarajan,
It's really nice to see like minded people. I too collecting these cuties and I will be very grateful if anyone help build my collection. Please help. If anyone is interested please do contact me at 8124037399 or thiagumurugu@gmail. Com

Dinakar, is there a way to know the duplicates you have. I can be reached at amitracal@gmail.com and can share pics of my dups some of which I may exchange with Seema.

Thanks to Dr. Seema and Mr. Murugan I was able to exchange a few Binaca toys from oceans apart and got some of my childhood favorites back. Amazing experience, unforgettable, have a few more duplicates if somebody is interested.

You have not posted my last few comments which is fine and you certainly do not have to post this one. But are you really not interested in any exchange for the duplicates which could enhance the diversity of the collection after so many years. I see you do mention about the enthusiasm with which we used to exchange these at that time. I really do see a lot of my absolute favorite lost ones in your collection and truly wanted to know about your duplicates and wanted to let you know my duplicates and entire collection. Is there anyway you can send me an email at amitracal@gmail.com or at amitra@us.ibm.com if at all possible. I will really cherish your email and eagerly wait for it.

Sir,
Thanks to you l relived my childhood.my mail id Thiagumurugu@gmail.com.l am eagerly awaiting for your reply sir please

From where can I buy it

I am interested, so is Murugan. I am at amitracal@gmail.com and he is at Thiagumurugu@gmail.com

Hello Kadambini,
Thanks for the offer.I would gladly talk to you about the exchange . Please contact me at smilealways2uma@yahoo.co.in ASAP. Awaiting your email in eager to see my childhood buddies whom I lost 😢
Thanks to Mr.Dinakar for refresh in our childhood memories :0)
Uma Suresh

Very happy to meet you via this blog.Thanks to Mr.Dinakar for connecting us on this nostalgic memory.I will connect with you via email to get some duplicates for my cousin who is affected with cancer😔 All if a sudden she wanted to see these little guys and I was searching in Google. Finally ended up in this blog :) I was happy to give her 4 or 5 of my buddies which is the least I could do to make her happy :0) Thanks again Mr.Dinakar.

I don't think you can buy these anywhere from. It was a passion, hobby or I'd say 'an addiction' to collect these Binaca Friends. So, I don't anyone in possession of these little gems can ever think of selling them.

I have around 80 Binaca toys and many duplicates. I am looking for a Giraffe, Pig & Pelican. In case anyone has duplicate of above, Pl contact me at kkgaur617@gmail.com for exchange. Regards.

Hi, there. These were made in small size so as to fit in Binaca toothpaste pack. Despite being small in size, these cuties were beautifully manufactured.

Does anybody know where the Binaca figurines from the 1970's can be purchased? My wife speaks of them so fondly that I would like to acquire a collection, or at least a few to give her as a gift.

I don't think anyone who has the collection of these little gems would think of selling it off. I have around 80 of these beauties. After me, my kids played with them and now my granddaughter plays but we all made sure not to lose any of these. I have some duplicates and can be exchanged if anyone interested in.

I have been collecting these Binaca Charms. I am 58 years young. Anyone interested in exchanging pictures, display ideas, list of all Charms in Alphabetical order please get in touch through WATTSAPPP #919789744404

I have been collecting these Binaca Charms all my childhood. I am 57 years young now. I am interested in exchanging information about complete Charms list, animal wise, colour wise,etc. I look forward to like minded people to exchange the photos of Charms, display techniques, lists, etc. I am willing to exchange my doubles with others who may have doubles in your possession. My WATTSAPPP mobile# is +91 9789744404