I read a blogpost by the prolific blogger, Mr.Abraham Tharakan, [click for bloglink] about his dancer-grand daughter Susan. Somehow I recalled J.B.Higgins.

This name was very popular in the 1960s and early 70s in the Carnatic Music arena.  He was unique because of he was an American singing Carnatic Classical Music with amazing proficiency.

One of Higgins' famous renditions "Krishnaa Nee Beganay Baaro," [Listen to the rendering, 7 1/2 minutes - click on the link] still reverberates with energy and my grandmother was in utter awe that a 'pirangi' [foreigner] could sing like this!  His rendering attracted people because his devotion seemed to emanate.

Although he mostly won the acceptance of the general Indian public during katcheris (concerts), there were always the critics of his times pointing out minor errors in pronunciation. This did not deter him but continued to deliver katcheri broadcasts on All India Radio.

His end was tragic.  He was killed by a drunken, hit-and-run motorist on December 7, 1984, while walking his dog. He was planning to perform in South Africa in protest against its then racist apartheid regime. His son Nicholas Higgins is an ethnomusicologist and a student of Carnatic Music.

He would have given many concerts in Mysore also but I am not able to clearly recall.  But I vividly remember the several radio broadcasts of his renderings that filled the air from our Bush Radio.

Let me grab some brief information on JBH from Wiki. [Jon or John?]


Jon Borthwick Higgins [click on Wiki link for full details] was an American musician, scholar, and teacher known principally for his rare skill as a non-Indian in the field of Carnatic music. He founded the Indian music studies program at York University in Toronto with Trichy Sankaran in 1971.  He is also recognized as the first non-Indian to perform South Indian classical Carnatic music at a high level of proficiency and also performed to great acclaim at the Tyagaraja Aradhana, a very prestigious music festival in South India. 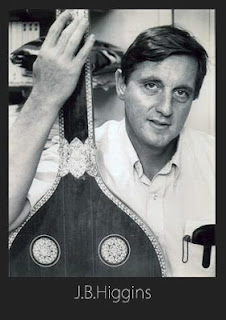 He recorded several albums and for his widely-recognized sensitivity was honored with the sobriquet "Bhagavatar" (scholarly musician).

Higgins was much appreciated by Indian connoisseurs and his rendition of "Endaro Mahanubhavulu Andariki Vandanamu" ("My salutations to all the great people"), a famous kriti (song) by Thyagaraja (a great composer of Carnatic Music), was extraordinary considering the fact that it is a difficult kriti for even the people with knowledge of the Telugu in which it is composed.

More information about this great singer is available on the web.
Posted by Dinakar KR at 11:06 PM

Enjoyed reading your musings. Lived in Mysore for a year and hope to return again. Thanks to you I am feeling homesick for Mysore today.